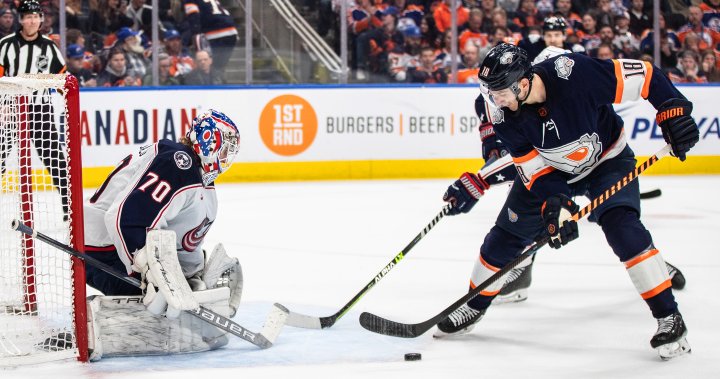 The Edmonton Oilers winning streak ended at six games with a 3-2 overtime loss to the Columbus Blue Jackets Wednesday night at Rogers Place.

Kent Johnson scored the winner with 2:31 left in overtime. He had the gold medal winning goal in overtime for Canada at the World Juniors at Rogers Place at August.

The Oilers had the better chances in the first but the Blue Jackets scored the period’s only goal. Boone Jenner tipped a point shot past Stuart Skinner for his fourteenth.

Skinner made a couple of big saves early in the second. He moved across the crease to his right to deny Nick Blankenburg on a power play one-timer.

A few minutes later, he gloved Johnny Gaudreau’s wrister on a breakaway.

Derek Ryan beat Joonas Korpisalo over the glove on a partial breakaway to tie it up halfway through the second.

Korpisalo came up with a stunning glove save on Leon Draisaitl on a power play.

On the same-man advantage, Zach Hyman deftly tapped in a pass from Connor McDavid to put Edmonton ahead 2-1.

With 8:34 left in the third, Kirill Marchenko bulled his way to the net and stuffed home the tying goal.

In overtime, Johnson cut into the middle and powered a shot past Skinner’s glove.