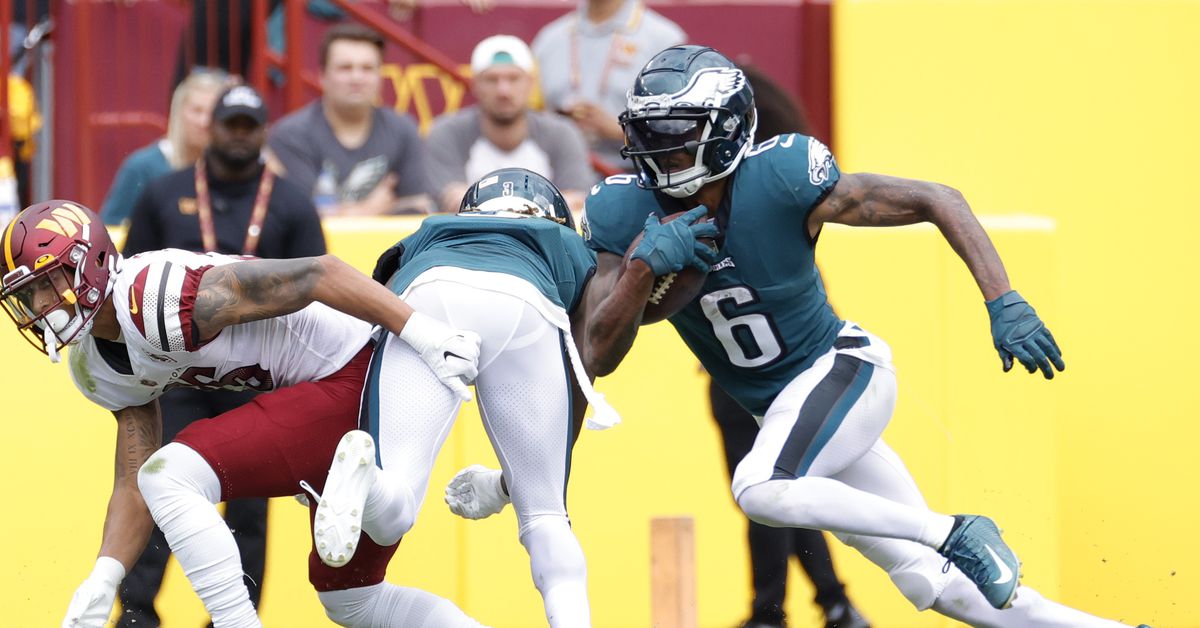 let’s get to the Philadelphia Eagles left …

Nick Sirianni wants DeVonta Smith returning punts when Eagles need a spark – PFT
“We wanted a little spark,” Sirianni said, via the Philadelphia Inquirer. “It wasn’t a slight by any means on Britain. We just wanted to get the ball in DeVonta’s hands when they were backed up. He did a nice job of getting some yardage off of that.” Smith had eight catches for 169 yards during the game, so he made a much bigger impact on offense than on special teams, but Sirianni thinks Smith can continue to make an impact as a returner. “We’ll see how that goes, what that turns into,” Sirianni said. “As of right now, it’s a spot thing. But who knows? We’ll see how that goes, continue to see how the season goes.”

Roob Stats: Smith does something that hadn’t been done in 82 years – NBCSP
1. Let’s start with DeVonta Smith, whose 169 yards were the most by an Eagle since Jeremy Maclin had 187 in a loss at Arizona in 2014. It was the most yards any Eagle had against Washington in 29 years, since Calvin Williams had a 181-yard game at the Vet in 1993. The only Eagle with more yards in Washington was Don Looney, who had 180 in a game at Griffith Stadium in 1940. It was the most yards by an opposing player in Washington since Mike Evans had 209 yards for the Bucs in 2014. Smith and AJ Brown (85 yards) combined for 254 yards. The last Eagles wide receiver duo with more yards in a game was Maclin (187) and Riley Cooper (88), who combined for 275 in a loss in Arizona in 2014. Brown (309 yards) and Smith (249 yards) are the first pair of Eagles ever with at least 249 yards through three games. And Brown is the first Eagle with at least 69 yards in each of the first three games since TO in 2005.

Eagles Rookie Report Card: Positive flashes from Jordan Davis and Grant Calcaterra – BGN
The whole defensive line got theirs against Washington’s offense, piling up nine sacks for the day. While Jordan Davis didn’t stuff the stat sheet, his impact was clear when he saw the field. On the very first play, Davis batted down a pass from the nose tackle position, setting the tone for how he and the defensive line would determine the outcome of the game. Davis was a problem for Washington every time he was in the field, even getting pressure on a pass rush late in the game and helping his teammates bring down Wentz for a ninth time. This is exactly the kind of contribution the Eagles need from Davis at this stage. Fletcher Cox and Javon Hargrave are still the spearheads of the line, but Davis can clearly elevate the group as a nose tackle as well.

2022 NFL Season: Grading all 32 first-round picks after Week 3 – PFF
13. PHILADELPHIA EAGLES: DI JORDAN DAVIS, GEORGIA. Davis played 24 snaps against Washington and showed that he can be a factor as a pass-rusher as well as in run defense. He notched four pressures from 14 pass-rushing snaps — one of eight Eagles defensive linemen with multiple pressures in the game. Davis has proven his immense physical ability holds up at the NFL level, and this was as consistent as he has been across three games across limited snaps.

Spadaro: Jonathan Gannon loves the progress, but plenty of room to grow – PE.com
There are standard pillars of achievement that Jonathan Gannon wants to see in his Eagles defense on a weekly basis and when the team hits those goals, good things happen. It’s not rocket science here, it’s playing physical, fundamental football. “That’s what we’re doing,” defensive end Brandon Graham said after Sunday’s 24-8 win at Washington. “Do your job and trust that the guy next to you will do his job. JG, he’s gonna put us in the right position to make plays. Go out and make ’em.” And that’s what the Eagles have done in this 3-0 start. They had an enable defensive stretch in the opener at Detroit – three straight three-and-out series followed by an interception returned for a touchdown – but didn’t quite attain the desired 60-minute consistency in performance. The last two weeks, a win over Minnesota and Sunday over the Commanders, the Eagles have been on point achieving what Gannon asks – affect the quarterback up front; tackle well throughout; play sound, assignment football; limit big plays; and take the football away on the back end.

NFL Week 4 Power Rankings: Bills, Chiefs Cling to Top Spots While Jaguars Climb – The Ringer
7. Philadelphia Eagles (3-0 | last week: 7). There’s nothing positive I can say about the Eagles that Philly faithful aren’t already screaming at the top of their lungs. Jalen Hurts is a legitimate MVP candidate, the AJ Brown–DeVonta Smith receiver combination is ascending to the top of the NFL, the offensive line is a top-three unit in the league—you name it, the Eagles have it. Hell, even their defense has bounced back in impressive fashion after allowing 35 points to Detroit in Week 1. Over the last two weeks, the Eagles rank first in yards per play allowed (3.8) and second in total points allowed (15).

Fantasy football flex and superflex rankings for Week 4 – ESPN+
3. Jalen Hurts, Eagles (QB3): Speaking of, the Eagles are throwing the football a ton, too. And their QB can handle it.

Are the Jacksonville Jaguars actually good? – Big Cat Country
There is a lot of football left to be played. But to this point, Jacksonville has been one of the best teams in the NFL. In fact, the Jaguars are the only team in the NFL to rank in the top-five in Football Outsiders’ DVOA metrics, which “measures a team’s efficiency by comparing success on every single play to a league average based on situation and opponent.” The Jaguars rank second overall in DVOA (45.9 percent), fifth in offensive DVOA (20.9 percent) and fourth in defensive DVOA (-24.6 percent).

Titans sign OL Le’Raven Clark, LB Joe Schobert – Music City Miracles
The Tennessee Titans signed versatile offensive lineman Le’Raven Clark to their 53-man roster off the Philadelphia Eagles’ practice squad, the team announced on Tuesday. The Titans also added veteran linebacker Joe Schobert to the practice squad. Titans General Manager Jon Robinson continues churning his roster. The versatile Clark has played in 51 career NFL games with the Eagles and Indianapolis Colts. the no. 82 overall selection in the 2016 NFL Draft out of Texas Tech, Clark has made six career starts at left tackle, six starts at right guard, and four starts at right tackle. Clark replaces some of the back end multipurpose the Titans lost when Jamarco Jones was placed on IR.

Dak Prescott says he probably wont be ready for the Commanders, looking for a Week 5 return vs the Rams – Hogs Haven
Dallas Cowboys starting QB Dak Prescott suffered a thumb injury in Week 1 that required surgery. The initial reports said he would miss 6-8 weeks, and end up on injured reserve. That recovery time was quickly disputed and rumors floated about a Week 4 return to face the visiting Washington Commanders. Dak Prescott got his stitches removed yesterday, and has been at practice, but not throwing. He was asked about a possible return this week, but he shot that down and is looking at a Week 5 showdown against the defending Super Bowl Champion Los Angeles Rams.

Cowboys at Giants: The good, the bad, and the ugly from Week 3 – Blogging The Boys
THE UGLY: CeeDee Lamb drops. CeeDee Lamb hasn’t exactly gotten off to the best start as Dallas’ new No. 1 receiver, but he may have turned the corner in Week 3 against the Giants. For the first time this season he led the Cowboys with 87 receiving yards on just eight catches. He also had a spectacular one-handed touchdown catch to cap off his evening. Sadly, what most of us will remember about his Monday night performance is his two drops that could possibly have been game changers. Hopefully he’ll learn from this and be much more consistently moving forward.

The simple answer for how the Eagles sacked Carson Wentz 9 times – SB Nation
In the time it took you to read this, Washington Commanders quarterback Carson Wentz was sacked yet again. Sure, that’s a bit of hyperbole, but it feels close to the truth. Wentz and the Commanders offense struggled with pass protection early, late, and often against the Philadelphia Eagles, as the quarterback was sacked a whopping six times over the first thirty minutes, and for a total of nine times in his meeting with his former team. The protection woes and defensive struggles added up to a 24-8 win for the Eagles, keeping them atop the NFC East standings. Washington dropped to 1-2 on the season with the loss, and now have more questions than answers regarding their passing game. As noted, the protection problems for Washington began shortly after kickoff, and before most fans were settled into their seats at FedEx Field. The first Eagles’ sack came on the opening drive of the game, as Washington faced a third down near midfield. Wentz dropped to throw, but was shortly met in the pocket by the pair of Josh Sweat and Brandon Graham.

Sterling Shepard injury – What are the Giants’ options for a replacement? – Big Blue View
Marcus Johnson. The Giants’ options for filling the hole left by Shepard’s injury is complicated by their tight cap situation. The Giants have just $5.2 million in cap space to see them through the season. That could limit them to the least-expensive options, and the players on their practice squad in particular. The Giants signed veteran receiver Marcus Johnson to their practice squad on September 5th, after he was released by the San Francisco 49ers. Johnson has played in 41 games, starting 12 in his career. He’s also familiar with Giants’ Assistant GM Brandon Brown and WR Coach Mike Groh. [BLG Note: Former Eagles WR could get a chance in NYG.]

Ravens cut Daryl Worley – PFT
The Ravens released veteran cornerback Daryl Worley on Tuesday, the team announced. Worley played in the Week 2 loss to the Dolphins, seeing action on five defensive snaps and four on special teams. He appeared in four games last season, including one with Baltimore.