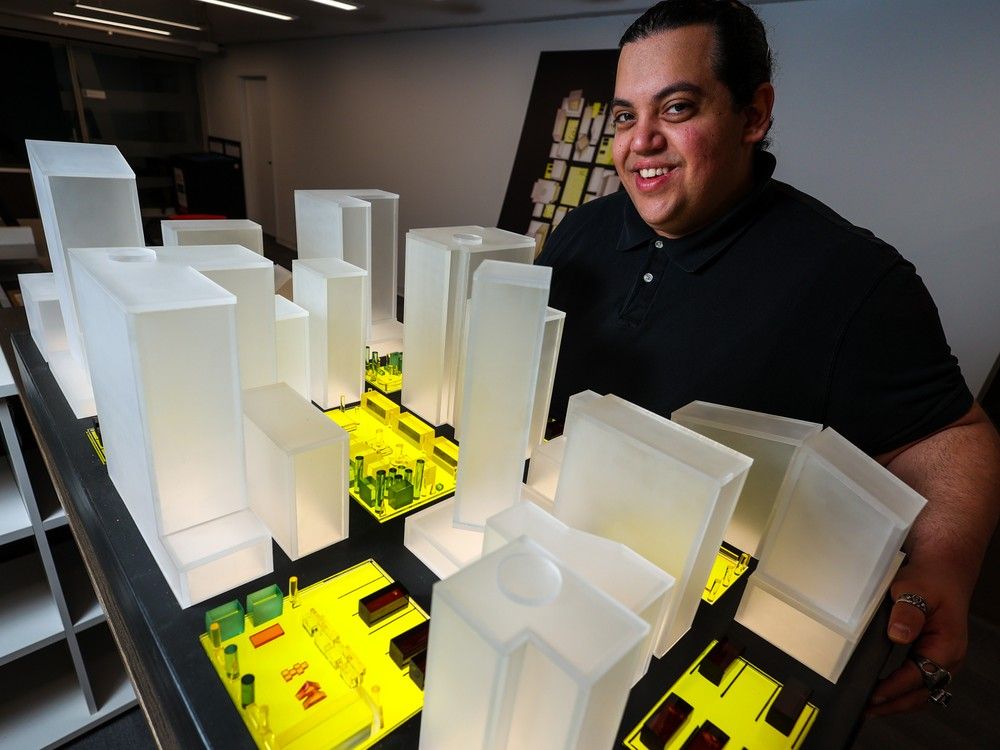 It’s not just downtown Calgary office buildings which have a vacancy problem.

Empty parking stalls, once a rarity in Calgary’s bustling core, are now commonplace among the city’s surface lots and parking garages, as vehicle traffic into downtown remains below historic highs due to prolonged challenges, including lower levels of leased office space and more people working from home since the COVID-19 pandemic.

But supply of the 12.5-square-metre slots remains high, with space for vehicles taking up a significant swath of real estate in the core.

That excess supply contributes to a broader problem of underutilization of space in and around the downtown, said Alberto de Salvatierra. He’s a University of Calgary researcher leading a project to identify spaces that could be used differently — work intended to aid the city in its downtown revitalization goals.

He said there’s a clear argument for reducing the amount of parking in downtown Calgary, converting those lots into amenities which could bring value to residents and visitors to the area. It’s the seemingly paradoxical idea that eliminating some parking could actually drive more people into city centre.

“Within the greater downtown Calgary, parking is very abundant. While perhaps at some point all this parking was used, now the usage of parking lots across Calgary has been significantly reduced,” said de Salvatierra, an assistant professor at the U of C’s School of Architecture, Planning and Landscape. But he acknowledged there may be some pushback against the idea of cutting down on stalls.

“Calgarians have a certain affinity towards parking. It’s an amenity that we’ve had for a while, it’s largely accessible, and the thought of having less parking might seem scary to some people.”

For some city leaders including Coun. Terry Wong, whose Ward 7 encompasses downtown, keeping parking in high supply is imperative. Wong said as the former executive director of the Chinatown business improvement area, he saw how vital vehicle space is for commercial tenants.

“Merchants need customers there. Merchants need to know customers can get to their shop district, in whichever mode of transportation they’re comfortable with,” he said.

Cost to park downtown declining, but so is demand

As inflation drubs Calgarians’ wallets, parking emerges as an outlier: it’s the rare expense that has actually become cheaper over the last several years.

Data from Parkopedia released this month shows the adjusted average cost for two hours of off-street parking in Calgary is now US$9.02, down 7.7 per cent from 2019. Calgary is now the 23rd-most expensive city in North America to park in, where it previously ranked 18th. Within Canada, however, only Montreal and Toronto have pricier parking.

That tick downwards in pricing corresponds with a drop in demand spurred by the COVID-19 pandemic, with the Calgary Parking Authority reporting usage has now returned to about 70 per cent of pre-pandemic levels.

“Parkade demand has come back more strongly than surface parking demand, so it’s seeming that people are willing to pay more for parking when they need it, but they don’t need it as often,” said Chris Blaschuk, the authority’s interim general manager.

“The demand is very localized, we’re finding, post-COVID. Buildings that have had staff where everybody needs to come back to the office, we’re seeing the parking return,” he said. However, in locations where employees have more flexibility, the parking demand is less.

There’s been an increase in parking demand over the fall, but usage rates remain fairly stable since the spring, Blaschuk added. It remains to be seen whether parking rates will continue to creep up or level out.

However, on balance, parking downtown is too expensive, Wong argued. He said lowered rates could spur higher utilization of supply.

“I’m looking at parking rates as an incentive to go downtown,” Wong said.

The cost of parking also emerged anecdotally as a key reason why people don’t go downtown, when hundreds of Calgarians responded to a Postmedia request earlier this year, asking them for their thoughts on downtown revitalization.

Blaschuk said the parking authority runs promotions meant to encourage commuters and visitors to park in underutilized lots, including a $20 daily maximum at Centennial Parkade, which was receiving less traffic than nearby sites.

Calgary’s history with parking lots dates back almost a century. Its first surface lot was built in 1924 along Canadian Pacific Railway tracks.

Parking supply in the core peaked in 1982, and has slowly contracted in the four decades since.

When the Calgary Municipal Land Corp. was tasked with revitalizing East Village, the district adjoining the Bow River had an excess of parking space.

Some of that capacity was necessary to service businesses, as retail developments made their home in the area. But other lots were flagged for development, to attract additional people to the area with nearby residents being able to access area businesses without getting in their car.

That also presented a chance to experiment with spaces identified as being underused — including the colourful Bounce basketball court on 4th Street and 8th Avenue S.E., beside the Central Library.

Nearby, the Platform parkade on 9th Avenue S.E. has seven storeys of parking in addition to other mixed-use space, but was designed with the ease of future adaptation for commercial or residential use in the future in mind, if the vehicle space is later deemed unnecessary.

“We’ve looked at some of our temporary lots over the years as an opportunity, because we had a sort of critical mass of them,” said Clare LePan with the land corporation.

“You’re losing some parking revenue as a result, but you’re bringing an amenity into the community.”

A similar idea was recently brought to the 8,400-square-metre rooftop of the Centre City Parkade at 340 10th Ave. S.W., which was turned from oft-empty parking space to a public park with high-up views of the Beltline. The rooftop has hosted events like live music and outdoor fitness classes since opening in October 2020.

Elsewhere, the Taste of Calgary food festival took over Calgary Parking Authority’s Lot #6 near the Louise Bridge this summer.

“We’re regularly reviewing the occupancy of our lots at various times of the day, what the community needs are and how they’re changing, (and) what are alternate things we can do with those lots,” Blaschuk said.

There’s also a recent partnership between the city, the U of C and REEF, the company which operates more than 100 Impark lots in Calgary. That ongoing six-month pilot will consult downtown stakeholders, including business owners and real estate developers, to create recommendations for how to repurpose some of REEF’s lots to meet community needs.

Calgary can look to other cities for further ideas on how parking lots could be transformed, de Salvatierra suggested.

In cities like Vancouver, companies have used parking lots to stage ghost kitchens — eateries which create meals for purchase on food delivery apps like Skip the Dishes but don’t have a physical storefront.

Other ideas could see festivals or night markets use parking lot space, like in Las Vegas, which on the first Friday of each month opens up street space to local art galleries, musicians and food trucks.

The Calgary Parking Authority plans to review its parking supply as it gets a sense of future demand to see whether its lower-use lots fit into long-term plans.

But the authority is unlikely to meaningfully expand its supply, Blaschuk said.

“It’ll be an ongoing review, but there will be some opportunities potentially to review low-demand locations and really ask ourselves, ‘Do we need to carry this forward in the future?’” he said.

Beyond traditional lots, the city has also been toying with how to better use street parking. That includes the new “market permit” policy which has drawn some criticism, including from Wong. Purchase of those monthly permits will be required for some residents of large residential buildings to park on the street, something meant to free up street space for area visitors as well as ride share or food delivery traffic.

The city’s land corporation is eying parking lots for redevelopment on the east end of the core, including sites on 11th and 12th Avenues, LePan said.

“Those are parking lots we’d seek to see developed as the community develops, because as you bring in other modes of transit — like the Green Line, like cycle tracks — those improved connections into the district offset the requirements for the number of parking stalls,” she said.

Wong said initiatives to encourage transit, cycling or walking as alternatives to vehicle use are virtuous, but questioned their feasibility in a city built for cars.

“It doesn’t rationalize when you look at the needs of all Calgarians over all four seasons of the year,” Wong said.

Reductions in parking would require major accompanying investments in public infrastructure, de Salvatierra said, which could take the form of subsidized transit, actions to improve public safety on the LRT and CTrain platforms, and development of more pedestrian-friendly areas.

He argued that rethinking parking isn’t just a way to better utilize space downtown, but also an imperative as the city eyes lowering emissions to combat climate change.

“If we look at the broader implications of what reduced parking might have for the city, it really becomes a much more positive outcome, where we can begin to foster pedestrian-friendly, walkable neighbourhoods, reduce reliability on oil and gas, and reduce greenhouse gas emissions,” de Salvatierra said.

“As climate change intensifies, it’s really incumbent upon everyone to explore all possible solutions.”