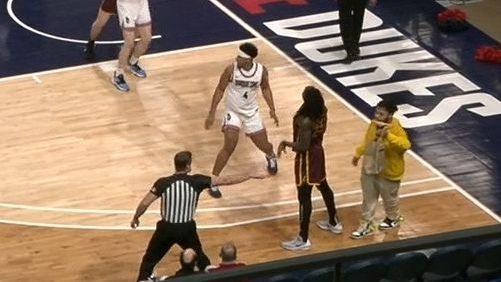 Or at least that was the case for someone at Wednesday’s game between the Loyola Chicago Ramblers and Duquesne Dukes, as the game was paused when an UberEats delivery person walked onto the floor holding a bag of McDonald’s.

With 4:30 p.m. left in the second half, a man in a yellow jacket wandered onto the floor — a few feet from where Loyola Chicago’s Philip Alston was holding the ball. The game was stopped with 16:10 left.

“Was he going to deliver the McDonald’s to somebody on the court? Can we rule that out?” one of the game’s announcers said. His partner on the call confirmed it was an UberEats logo and a bag of McDonald’s.

Did a delivery guy just walk on the court? 🤔😅 pic.twitter.com/iBjTRXaw2X

The delivery person was shown again a few minutes later, walking around the concourse level, looking to track down the person who ordered the food.

Abby Schnable, a reporter for the Pittsburgh Post-Gazette, tweeted that eventually the food found its way into the right hands.

“Only at Duquesne can a guy deliver food on the court during the game,” Duquesne coach Keith Dambrot told reporters after the game. “Craziest thing I’ve ever seen in my life, other than when I was an assistant at Eastern Michigan, we had these friends of ours that were good fans. And they got the ice cream guy to deliver the ice cream to the coach coaching the game, during the game. The closest thing I’ve seen to that.”