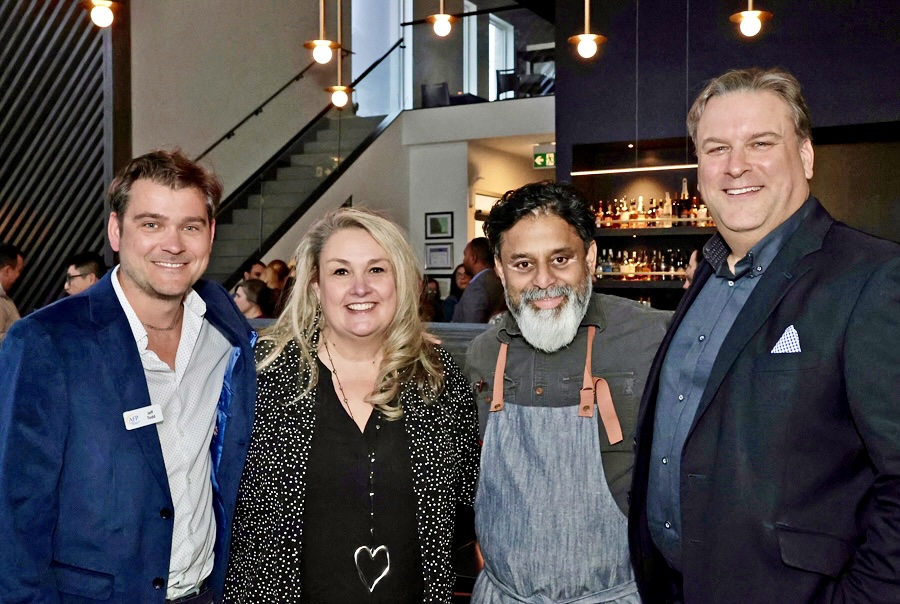 There were no pitches, no presentations, no big asks. Last night’s sold-out New Year social for the Ottawa chapter of the Association of Fundraising Professionals (AFP) was purely a community of like-minded people coming together to talk, share insights and to learn from one another.

And here’s the best part: they got to do it while being hosted by Coconut Lagoon, the South Indian restaurant on St. Laurent Boulevard owned by Joe Thottungal, a multi-award-winning chef who’s been honored for both his flavorful cuisine and his humanitarian work. In 2020, he was named outstanding individual philanthropist by AFP Ottawa. In 2022, he was chosen Newsmaker of the Year by Ottawa’s business community.

“It was not an accident that we chose to hold it here,” AFP Ottawa’s new board president, Jeff Toddsaid during his brief remarks with David Gourlaywho, as vice president of Shepherds of Good Hope Foundation, is the new head of membership with the AFP Ottawa board.

The social gathering attracted some 80 attendees, many of whom work in the charitable sector. There were also business leaders with a connection to non-profit groups. The time seemed to fly by, with one great conversation after another in the comfortable, elegant setting of Thottungal’s stunning restaurant, which was recently reconstructed due to fire.

It’s an important time for AFP Ottawa, in terms of bringing members together, building enthusiasm and creating a sense of community, Todd told OBJ.social. “I’m a firm believer in strength in numbers.

“The networking, the peer bonding, the sharing of ideas — it’s contagious,” he continued. “I think it creates a sense of excitement about what we’re doing in fundraising and in the non-profit sector. I think that’s going to make us better fundraisers. It’s going to make us more inspired and more educated when we go out to donors in the city and raise large amounts of money, because there are a lot of big asks out there and a lot of big capital campaigns.”

Todd also serves as vice president of marketing and communications at Foundation WCPD. It’s the long-time presenting sponsor of AFP Ottawa’s annual Philanthropy Awards dinner. WCPD, a financial services business with a focus on philanthropic tax planning and tax reduction, is one of the more generous businesses in Ottawa, as well as in the Bahamas, where WCPD president Peter Nicholson owns Great Exuma’s Grand Isle Resort & Residences.

Professional fundraisers are surprisingly collegial, the reception revealed. “What I always find is that, from the outside, you might imagine that we’re a competitive bunch,” Bronwen Dearlove, senior development officer with the National Arts Center Foundation, told OBJ.social. “It’s a big community, there’s a lot of need, but there’s also a lot of heart. We learn from each other and help each other out, and it’s just amazing to be part of such a supportive group.”

That kind of support is important, especially as charities continue to fundraise on the edge of economic instability.

“We know that people right across the city are really feeling the pinch,” said Ottawa Food Bank president and CEO Rachel Wilson. The tough times aren’t limited to just her organization’s clients, either. “It’s every-day people who are seeing it in their grocery bills, in their housing bills.”

It’s become harder to raise money, she acknowledged. “We’re very concerned. If a recession comes in and there’s a loss of jobs, that’s going to mean even more people accessing the food bank but less donations to support the community.”

That’s also going to leave the Ottawa Food Bank working “as hard as we can”, said Wilson, who believes her organization and others in the same boat will pull through. “Fundraisers are some of the most resilient and amazing people in this city, and they work so hard. I’m confident they’ll be able to meet the demands.”

While fundraising often gets described as one of the most difficult jobs, it can be very rewarding, say those who work in the industry.

“One of the most exciting things about being a professional fundraiser is the relationship building,” said Rob Gottschalk, the new CEO of the Canadian Nurses Foundation, which advances nursing knowledge and improves health care by providing research grants, awards and scholarships to nurses and nursing students. He was previously at The Ottawa Hospital Foundation for almost nine years. “Another is getting to show a donor their impact.

“Unfortunately, I’ll never be a nurse or a doctor — I was never blessed with the level of compassion, the skills or the level of intelligence needed in those roles to help those in their weakest time,” said Gottschalk, who does, however, have the experience and ability to build relationships, strategies and partnerships. “I am honored to work alongside a dedicated group of volunteers, staff and donors to help Canadians through the advancement of nurses.”