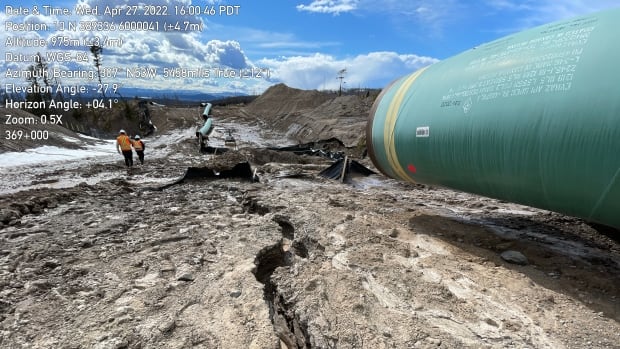 The company behind a contentious natural gas pipeline project in northern BC has been fined a third time for non-compliance with environmental orders, according to the provincial government.

The Environmental Assessment Office (EAO) has fined Coastal GasLink (CGL) $213,600 for what the Ministry of Environment and Climate Change Strategy described as “continued deficiencies with erosion and sediment control measures” identified during inspections of pipeline construction in February 2022.

The ministry says similar issues over the past year have led to enforcement action but noted improvements since Coastal GasLink and the EAO entered into a compliance agreement last summer.

The latest penalty is related to a section of the pipeline route near Kitimat in northwest BC before the signing of the agreement.

In a statement published online, Coastal GasLink says the penalty reflects concerns from a year ago, and it took “immediate and decisive action” to address them.

“Today’s determination by the EAO is a reminder of how far we’ve come in a year, and we are encouraged by their recent recognition of that progress,” the statement reads. It went on to say the company continues to work with regulators to look for ways to improve, especially in regard to erosion and sediment control.

There have been more than 50 inspections along the pipeline construction route since the project’s inception in 2019, the ministry says. The Environmental Assessment Office has issued 37 warnings and 17 orders.

BC Green Party Leader Sonia Furstenau was critical of the BC NDP government and says it’s time to issue a stop work order on the project.

“These are not isolated incidents,” Furstenau said in a statement. “CGL has demonstrated a reckless, spiteful and dangerous attitude towards laws and regulations. They simply absorb the costs of relatively small fines and continue to destroy ecosystems.”

Furstenau says the BC NDP government has the tools to keep the company in compliance but chooses not to use them.

“Until Coastal GasLink can demonstrate in good faith that it can construct this pipeline in a manner that is safe for the public and the environment, it should not be allowed to proceed.”

Coastal GasLink’s pipeline is set to bring gas fracked in northeastern BC to an LNG terminal in Kitimat.

The project is opposed by some Wet’suwet’en hereditary chiefs.