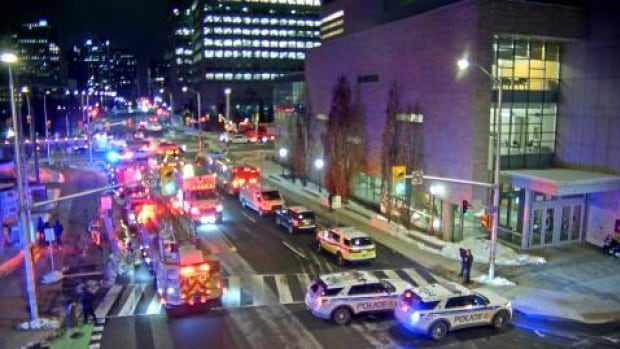 Residents of a highrise apartment building on the corner of Laurier Avenue and Nicholas Street had to leave early Wednesday morning because of extremely high levels of carbon monoxide, Ottawa Fire Services (OFS) said.

Just before 4 am, a resident called 911 to report an alarm in their 17th floor unit, according to a fire department spokesperson.

Residents were told to leave 50 Laurier Ave. They took shelter in a nearby University of Ottawa building and on OC Transpo buses.

Nobody was injured, said Ottawa paramedics.

Since 4am, our crews have been on scene at a high rise building at 50 Laurier for extremely high levels of Carbon Monoxide throughout the entire structure. The entire building has been evacuated & sheltered in a @uOttawa building/@OC_Transpo busses. More to follow. #OttNews pic.twitter.com/bOo5eogOAB

OFS said it suspects a faulty ventilation system is at fault.

By around 7 am, firefighters had finished venting the building and were letting residents on upper floors return to their units. Laurier Avenue East also opened back up in the area.