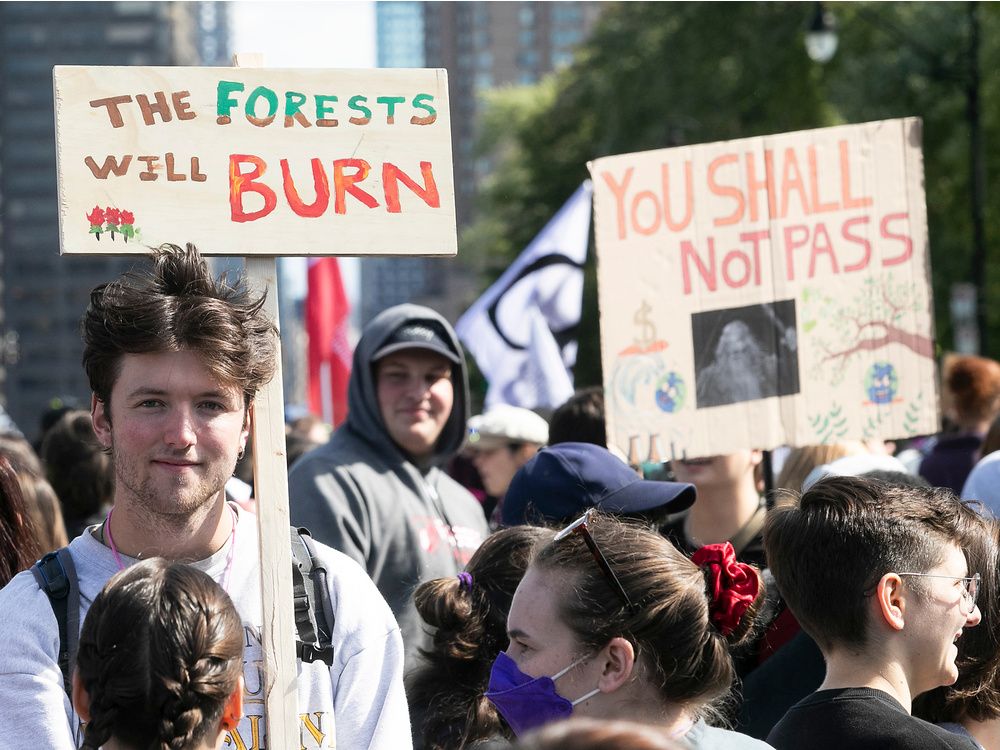 Outgoing Quebec Environment Minister Benoit Charette and other candidates from the Coalition Avenir Québec were insulted and told to leave when they attempted to join a march against climate change in Montreal on Friday.

Accompanied by such outgoing CAQ cabinet ministers as Pierre Fitzgibbon and Chantale Rouleau, Charette was abruptly interrupted by demonstrators, including some organizers of the protest, when he tried to give a press briefing to vaunt his government’s environmental record at the edge of the march.

Demonstrators chanted “You are not welcome” and “Out with the CAQ” as Charette tried to speak at Jeanne-Mance Park at 12:15 pm

Asked whether he still intended to participate in the demonstration despite the uproar, the outgoing minister said: “Yes, of course,” adding he had attended several marches since 2019.

A strong police presence surrounded the CAQ candidates, who then headed toward the George-Étienne Cartier monument across the street at the foot of Mount Royal.

The protesters’ insults and screams grew louder and the CAQ politicians left around 1:20 pm

Protest organizers said they had warned the politicians beforehand not to show up if they won’t endorse the climate demands of the coalition that was demonstrating Friday.

“If these politicians do not share our demands, no, they are not welcome,” said François Geoffroy, spokesperson for Workers for Climate Justice, which is part of the coalition, during a press conference Friday morning.

“When you participate in a protest, it’s usually because you support the demands,” added Véronique Laflamme, spokesperson for housing group FRAPRU and a member of the coalition.

The coalition of unions, student associations and community groups is calling for a “complete exit from oil and gas by 2030.”

Geoffroy said the demand is “radical” because it would require a complete end to fossil fuel use and production by 2030. That would mean stopping the use of gasoline vehicles by 2030.

“But this is the discourse that we want to put forward because, unfortunately, we have been dragging our feet in the transformation of our societies for 30 years and here we are facing a wall,” Geoffroy said.

The coalition’s spokesperson, Marie-Josée Parent, said in an email to the Presse Canadienne the evening before the march that politicians were also asked not to come if they don’t agree with the demands and also to walk at the end of the line at the protest “as a sign of humility in the face of the magnitude of this crisis which must go beyond partisanship.”

Québec Solidaire co-spokespersons Gabriel Nadeau-Dubois and Manon Massé and several people waving the party’s flag were present at the march.

Nadeau-Dubois said he wasn’t surprised by the treatment given to the CAQ politicians as the party and its leader, François Legault, are promoting the tunnel project, or “third link,” in Quebec City.

Liberal Party Leader Dominique Anglade, who didn’t have the protest on her campaign schedule, received a mixed reception. Some young people asked to take a selfie with her, while others accused her of using the event to score political points, telling her: “Let us walk alone!”

Parti Québécois Leader Paul St-Pierre Plamondon had also planned to attend the protest, but announced in the morning he had to cancel his activities for the day because of “flu symptoms.”

Protests were also planned in other Quebec municipalities.