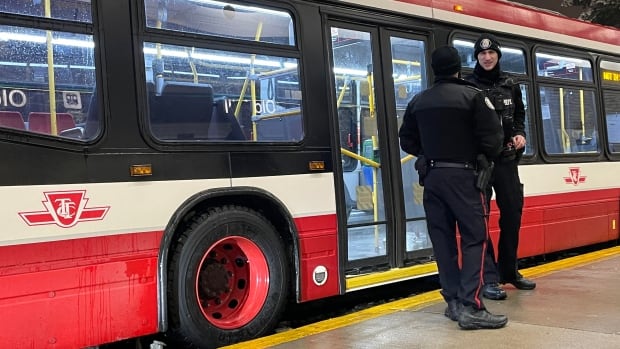 A 16-year-old boy was stabbed on a Toronto bus Wednesday afternoon and sent to hospital with serious injuries, police say.

Duty Insp. Lori Kranenburg told reporters at the scene the stabbing took place on a bus at Old Mill subway station around 4 pm She said upon arrival officers found a youth with stab wounds to his torso and legs.

Kranenburg also said there’s currently no indication the victim and suspect knew each other.

Police say the suspect is described as a person in their 20s or medium build, wearing a blue mask and black jacket with their hood up.

The suspect was last seen heading eastbound on Bloor Street West, they say.

Stabbing latest amid rash of violent incidents on TTC

The stabbing comes after Toronto Mayor John Tory called for a national summit to tackle the mental health crisis that may be connected to the recent uptick of violence on the city’s transit system.

The stabbing is the fourth case of violence in five days on the city’s transit system. In the past five days, police reported separate incidents involving harassment and assault against TTC employees, and a resident stabbed several times while on a streetcar.

Earlier in the day, a person was arrested after allegedly chasing two TTC workers with a syringe.

In a statement on Twitter, the Toronto Transit Commission says it has no further information at this time on Wednesday’s stabbing and its thoughts are with the victim.

“As always, we’ll give police our full support as they investigate, including video and witness statements,” the statement
reads.

Cities outside Toronto are also witnessing an increase of violence on their transit systems. The Amalgamated Transit Union Canada, representing 35,000 transit workers, called for a national task force to tackle violence against workers and riders on public transit systems across the country.