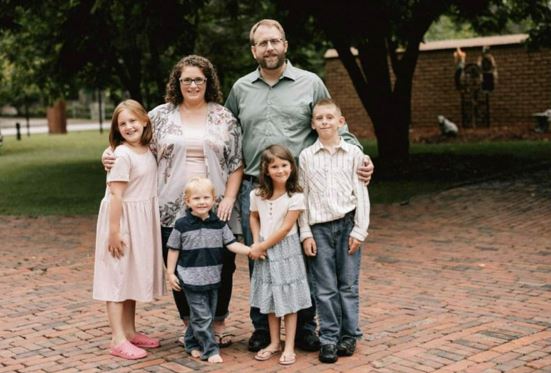 BUCYRUS–A benefit is being held Saturday for a Nevada man and father of four who is battling cancer of the esophagus.

The event, which will raise money for Benjamin Rush’s medical expenses, begins at 4:30 pm in the youth building of the Crawford County Fairgrounds. Tickets are $20 each, which includes dinner, a silent auction, live entertainment, and raffle drawings.

“Ben has been the breadwinner for his family so his wife, Sarah, can stay at home with their four children, ages three to 11, that she home schools,” said Andrew Rush, Benjamin’s older brother. “He is currently unable to work.”

Rush, 43, was diagnosed with stage four esophageal cancer last August. He underwent chemotherapy, and doctors at the Cleveland Clinic planned to remove a large tumor in December, but a scan revealed two bone lesions on his left hip, Andrew Rush said.

Since the cancer spread during treatment and due to its aggressive nature, Rush said the surgery was canceled. “His oncologist is not proposing curative care and he must now choose between hospice care, alternative treatments, or palliative chemotherapy.”

Although the family has already set up a GoFundMe account, those funds have been used for daily trips to Cleveland and necessary medication, Rush said. Saturday’s benefit will help offset expenses of getting his brother to a hospital in Tijuana, Mexico.

“That is the best option at this time to help slow down the cancer spread and growth,” Rush said.
“The procedure is currently not done in the United States. There’s plenty of success stories, with terminal patients coming out of that facility.”

Rush said his brother, a graduate of Wayside Christian School, already has a flight Jan. 31 to Mexico, where he will have to stay for three weeks. “He seems to be coping with it pretty well. The money we’re raising is for the everyday expenses plus the trip to Mexico.”

Dan Lew Exchange and Tito’s are catering Saturday’s benefit, while family friend Garrett Leonberger will be smoking pork for pulled pork sandwiches, Rush said. After the auction and 50-50 drawings, the band “Rolling Hams” will perform from 7:30 to 11 pm

Rush said auction items are still being solicited. Donations can either be dropped off at Rush Woodworks, 1620 Whetstone Street, or at the fairgrounds’ youth building Friday between 5 and 7 pm, where volunteers will be setting up for the benefit.