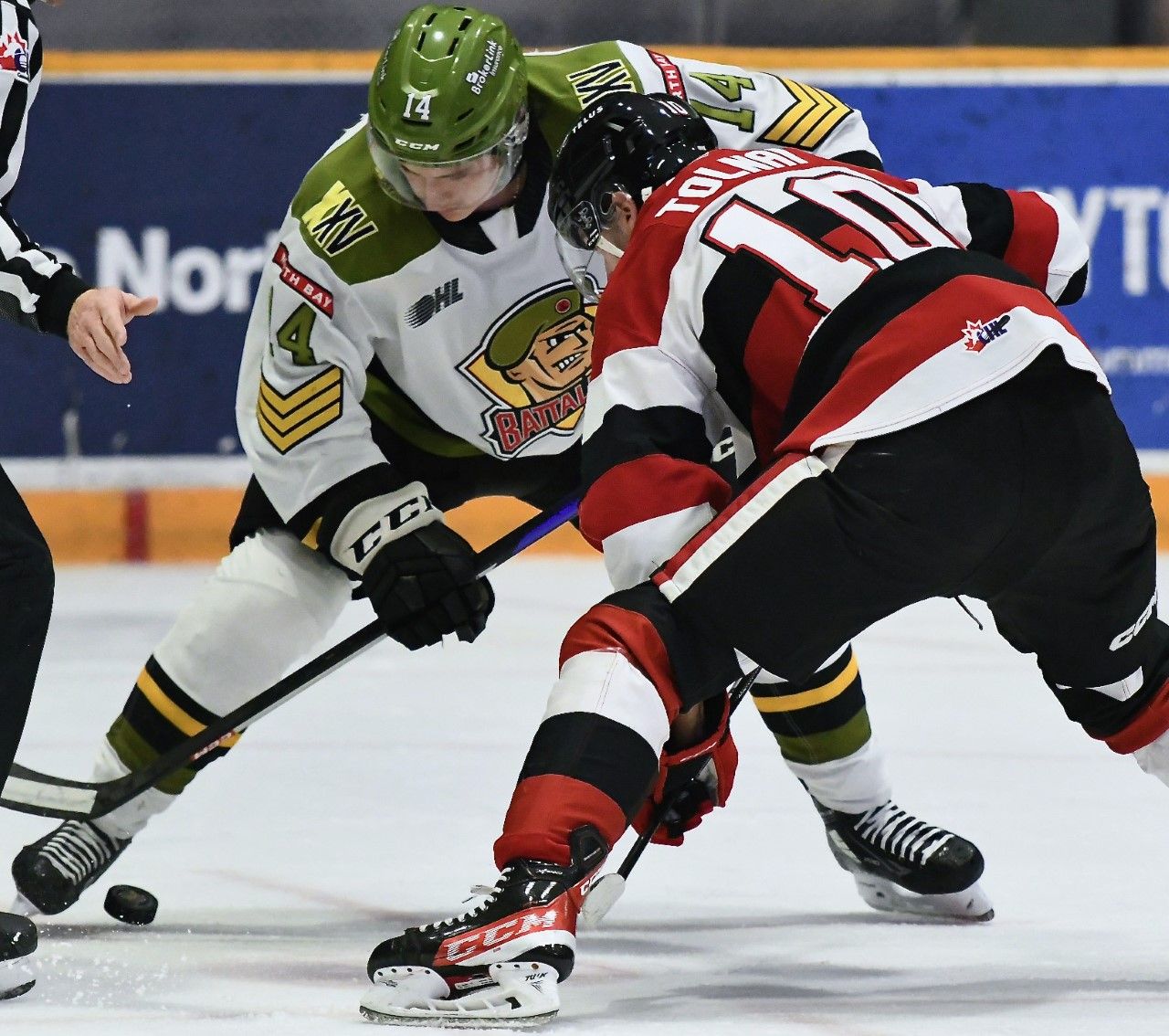 Kyle Jackson scored two goals and goaltender Charlie Robertson made 18 saves for his first Ontario Hockey League shutout as the North Bay Battalion skated to a 5-0 victory Thursday night over the Ottawa 67’s in a battle of Eastern Conference division leaders.

Nikita Tarasevich, Owen Van Steensel and Anthony Romani had single goals for North Bay, which improved its won-lost-extended record to 15-6-0 for 30 points atop the Central Division.

Rookie Robertson, making a second straight start for the first time in the absence of Dom DiVincentiis, who’s in concussion protocol, produced the first Battalion shutout since Joe Vrbetic blanked the visiting 67’s in a 3-0 verdict Nov. 18, 2021.

Starting goaltender Max Donoso, who leads the OHL with 12 wins, allowed four goals on 25 shots before Collin MacKenzie relieved him in the Ottawa net and surrendered one goal on 10 shots before a crowd of 2,516. Ottawa, which boasts the league’s best record, suffered a second consecutive defeat and is 18-3-0 for 36 points, first in the East Division.

“That’s an impressive feat to have a shutout against that hockey team,” Battalion coach Ryan Oulahen said of Robertson’s showing. “It’s not easy. He keeps it really simple and stable back there.”

Jackson and Tarasevich expanded a one-goal lead to 3-0 early in the middle period, sparked by Jackson’s conversion on the left wing of a three-way rush with Josh Bloom and Ty Nelson, each of whom earned two assists. Jackson’s 12th goal of the season came 53 seconds into the period and tied Dalyn Wakely for the team lead.

Matvey Petrov fired a breakaway pass up the middle past two defenders to Tarasevich in the neutral zone, and he went in alone to beat Donoso on a backhand 1:28 later. Wakely also assisted on Tarasevich’s sixth goal.

Video review negated a would-be goal by Ottawa’s Jack Dever when he was seen to have knocked the puck into the net with a high stick at 4:57.

Van Steensel raced into the goalmouth to negate an icing call as Donoso dithered at the crease and, when Van Steensel drilled his sixth goal between the goaltender’s legs at 2:50 of the third period, it spelled the end of his night.

Romani was wide open on the left wing to cash his sixth goal on assists by Ethan Procyszyn and Wyatt Kennedy at 15:46, completing the scoring.

Jackson struck first at 15:49 of the opening period, redirecting a shot from the high slot by Bloom. Justin Ertel drew the other assist.

Seconds after Ottawa’s Matthew Mayich hit the left post, Robertson shot out the left pad to deny Cooper Foster in tight at the right post at the 17-minute mark. Nelson appeared to have scored at 17:39, but video review suggested that he benefited from a hand pass in the goalmouth.

After Jackson went off for slashing at 18:07, penalty killer Wakely got past Anthony Costantini for a breakaway, but Donoso rejected a backhanded attempt.

The Battalion opens a two-game road trip with a visit to the Hamilton Bulldogs at 7 pm Friday. The game can be seen live in North Bay on YourTV Channels 12 and 700.

BATTALION BULLETS: The game marked Special Olympics Night in partnership with the North Bay Police Service, with athlete Riley Bell taking part in the ceremonial faceoff with Scott McFarlane, a 28-year police veteran. Fans donated $4,711 during a second-period bucket pass … It was the third of four games between the clubs. Ottawa defeated the visiting Battalion 4-1 on Oct. 8 before a 4-2 win Oct. 20 at Memorial Gardens. The next meeting is at Ottawa on Feb. 20 … Robertson, who turned 17 on April 2, was a seventh-round pick in the 2021 OHL Priority Selection from the London Jr. Knights U16s. In eight appearances he has a 4-2-0 record, a 2.75 goals-against average and an .888 save percentage … Nelson has a four-game points streak in which he has two goals and six assists for eight points … The Battalion went 0-for-6 on the power play. Ottawa was 0-for-5 … Apart from DiVincentiis, the Battalion scratched Tnias Mathurin, Avery Winslow, Kyle McDonald and Brett Bouchard … DiVincentiis was bumped in practice Tuesday and is sidelined for the weekend, which the Troops wrap up with a Saturday night visit to the Niagara IceDogs … Mike McIvor was called up from the North Bay Trappers U18 team to back up Robertson. McIvor was a fourth-round pick in the Priority Selection last April from the Quinte Red Devils U16s.