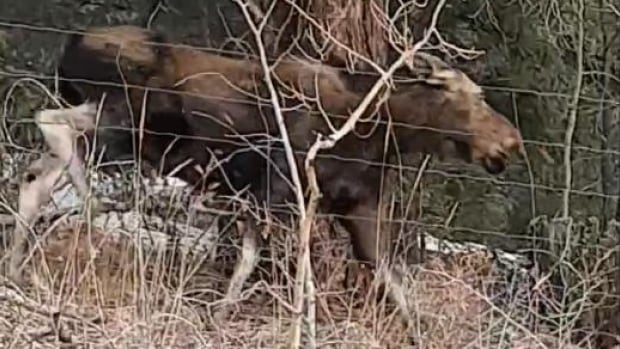 On his way to a post-surgery medical checkup in Penticton, BC, Kirk Barharn spotted a moose trapped in wire fence.

“Poor thing! She’s stuck in the fence,” the man from Princeton, BC, told his wife, Angie Hillmer, seated next to him in the car.

The couple backed up along Princeton Summerland Road, toward the spot where the animal was trapped, by the roadside near Thirsk Lake.

“I think you should help — she’s gonna die,” Hillmer told her husband.

Barharn had never seen a moose up close.

Despite a recovering ankle, he limped toward the animal and helped wrangle it out of the fence.

“Good girl!” Hillmer is heard saying on the video after the animal trotted away.

She shared the three-minute video on Facebook on Tuesday.

Penticton field conservation officer Brandon Beck, who has seen the video, says it’s common for moose and other wildlife to get trapped in fences during the winter, while trying to jump them and then sliding on the snow.

Though glad the moose is now safe, Beck asks the public to seek the help of conservation officers instead of rescuing distressed wildlife themselves.

“[Barharn] was able to get it out, but I’ve had other situations where people get injured by a moose while trying to help them,” he said.

Barharn says the moose, which he estimates weighs more than 270 kilograms, panicked when the vehicle approached, although it couldn’t move.

“I don’t think she could move at all, because her front hooves were [trapped] in there,” he told host Sarah Penton on CBC’s Radio Western.

For his part, Barharn’s doctor said an X-ray showed his ankle is recovering well.

Hillmer says she is considering packing the car with tools for rescuing wildlife, because she and her husband have often seen different animals running into the wire fence where the moose was trapped.