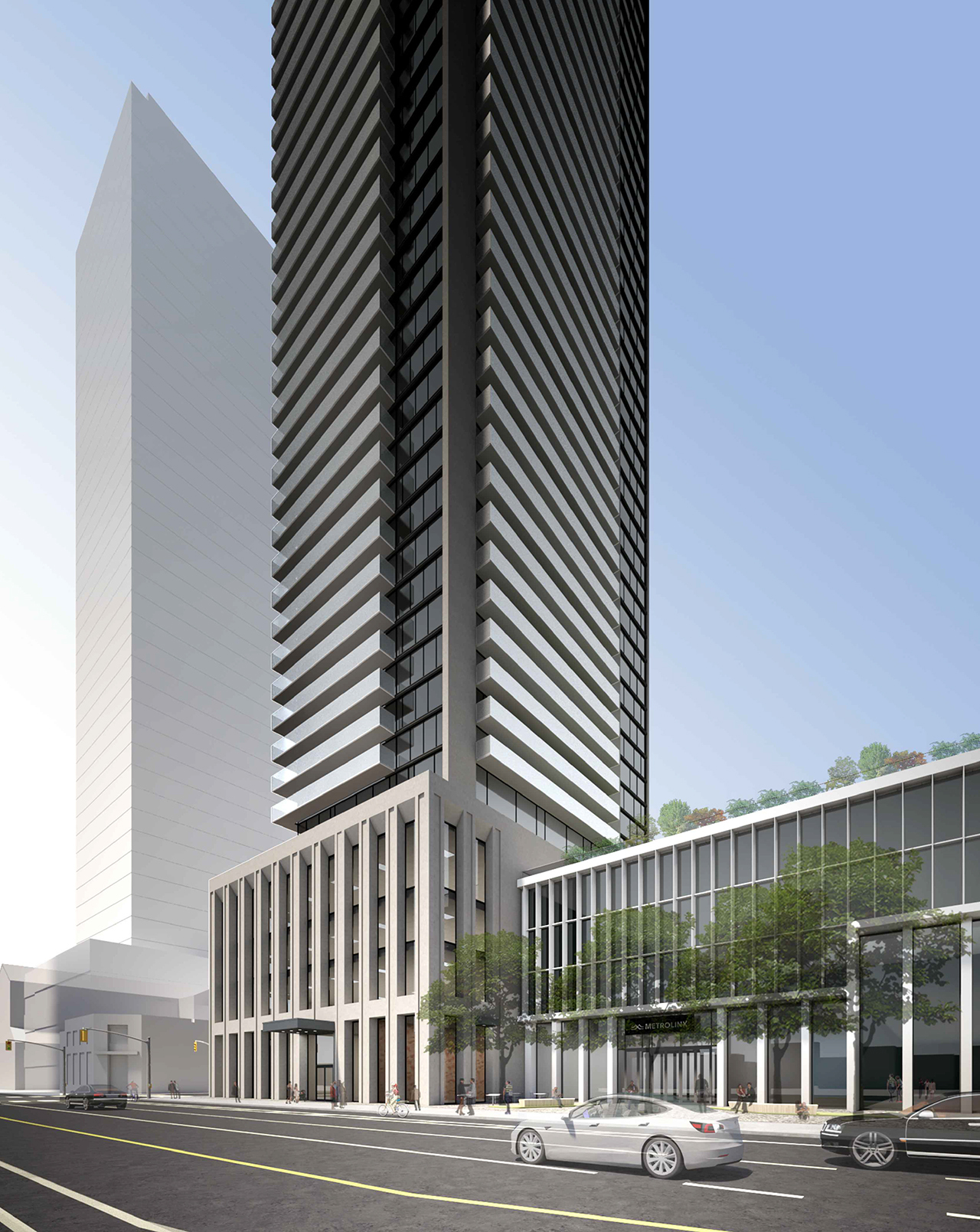 Toronto’s ‘The Danforth’ looks set for significant residential intensification with a Zoning By-law Amendment application and Site Plan Approval application submitted by Goldberg Group for a proposed 49-storey mixed-use building located at the northeast corner of Danforth Avenue and Pape Avenue. The application, submitted on behalf of developers Del Boca Vista Properties Inc. and 717 Pape Inc., enlists the architectural expertise of Studio JCI, who are also responsible for a recent modern flatiron building interpretation at 775 Vaughan Road in Oakwood Village.

Looking northeast to 656 Danforth Avenue across the intersection with Pape Avenue, image from submission to the City of Toronto

The assembled 1,689m² site, with municipal addresses of 654 through 668 Danforth Avenue and 717 through 723 Pape Avenue, is currently occupied by a three-storey mixed-use rectilinear building abutting the intersection, and a four-storey mixed-use building that engulfs the other in an L-shaped configuration. Consisting of retail at grade and offices on the upper levels, these buildings would be demolished as part of the application.

Looking northwest to the 656 through 668 Danforth Avenue site, image from submission to the City of Toronto

Located within the Mixed Use Areas designation in the City of Toronto Official Plan, the site’s centrality and adjacency to commercial and institutional facilities have meant it is the focus of residential intensification. Already highly accessible via TTC’s Danforth Line 2 subway at Pape station immediately to the north, the station is targeted to have an interchange with the future Ontario Line around 2030. Several surface transit routes also serve the existing station.

Studio JCI’s proposal conforms with the high-rise typology ever present in Toronto’s vertically rising skyline. A 5-storey monolithic masonry-clad podium grounds the 160.7m tower above and adds pragmatic harmony to the previously convoluted facades of its predecessor. Nominal setbacks of 2.5m and 1.8m to the southern and western property lines help to enhance the public realm with a landscaping proposal compiled by STUDIO tla.

The proposal’s massing amidst its mainly low-rise surroundings, submission from submission to the City of Toronto

At grade level, charcoal gray precast concrete cladding and pre-finished aluminum reveals expertly define the loading and parking entry point leading off Pape Avenue on the site’s northwestern perimeter. This will provide a dedicated ramp leading to three levels of underground parking, providing 84 vehicle parking spaces and a portion of the 520 bicycle parking spaces in the building.

Looking northwest to 656 Danforth Avenue, image from submission to the City of Toronto

A shared residential and office lobby fronting Danforth Avenue is sandwiched between two retail and commercial spaces that abut the building to the east — which will be a new entrance to the expanded Pape subway interchange station — and wrap around the development’s western facade. This shared lobby provides access to 29,756m² of residential Gross Floor Area located between the 6th and 49th floors, three floors of office space on levels 3 through 5 and 1,984m² of combined indoor and outdoor amenity space.

The site in orange, with surrounding planned developments and potential ones, image from submission to the City of Toronto

UrbanToronto will continue to follow progress on this development, but in the meantime, you can learn more about it from our Database file, linked below. If you’d like, you can join in on the conversation in the associated Project Forum thread or leave a comment in the space provided on this page.